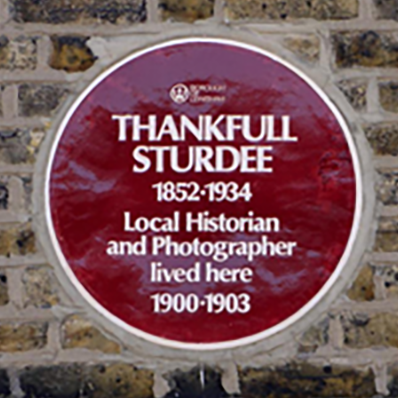 Born in 1852 at 209 Evelyn Street; his father was a tailor, then a stationer.  The family had a long connection with Deptford.  Thankfull Sturdee married Catherine Sarah Bland in 1883 when he was living at 27 Albyn Road, St. John’s, London SE8. The 1901 Census noted: Thankfull Sturdee, age 48, born in Deptford, civil parish Deptford, occupation photographer.

In 1903 they were living at 16 Bolden Street, not far from Albyn Road, but by 1910 they had moved to Brockley, London SE4 until his death in 1934. There is a Lewisham maroon commemorative plaque at the Bolden Street house.

In 1911 he joined the Daily Mirror as a press photographer until he retired in 1923. Outside work, his main interest was Deptford’s history. He became known for his photographs of late 19th century Deptford, including those of Fowlers’ Troop and the Deptford Jack in the Green, the modern version of which goes out around Deptford and Greenwich every May Day.  He took photos and did research some of which he published in his book Reminiscences of old Deptford in 1895.  He sold his negatives and two series of prints with his own notes to the Deptford Borough Library, now part of Lewisham Library, in 1928.

Known as one of the earliest press photographers a new book brings together, for the first time, nearly all of his Deptford photographs, a selection of his press photos and new research into his life and career.

You can see materials relating to Thankfull Sturdee, including prints of his photos, at the Lewisham Local History and Archives Centre.