Before the growth and expansion of London 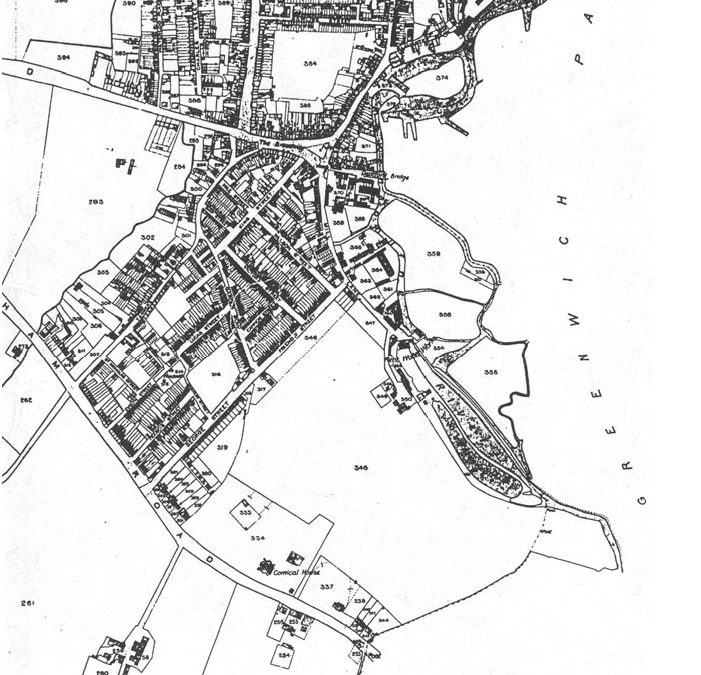 Until the industrialisation of Britain that led to the rapid sprawl of London over the first half and middle of the Nineteenth century, south-east London was a series of market towns and villages each with an economy focussed on servicing what were then the two distinct cities of London and Westminster. The area now containing the St. John’s ‘model new town’ was a rural hinterland, some distance from London, and lying between the towns of Deptford, Greenwich and Lewisham. At this time Deptford was by some margin the wealthiest of the three, but both Greenwich and Deptford grew rich over their fortuitous locations on the Thames – the river at the head of fledgling trading relationships that spanned the globe.

At this time the area is known to have been home to ‘Market Gardens’, which were areas around the cities of London and Westminster which grew fruit and vegetables. St. John’s soil remains rich to this day. One of the earliest Ordnance Survey maps for the area show the River Ravensbourne flowing south past a vast area of open space called Deptford Common. Today, this is covered by much of the Brockley Conservation Area of tall late Victorian terraces. We can only imagine the Common resembling something along the lines of Blackheath, with its southern aspect also containing the loam pits after which ‘Loampit Vale’ is named. Blackheath, it should be remembered, contains to this day the remains of old quarries after what was presumably a similar tradition.

With the river so close to St. John’s, the area’s orchards were bordered by ‘The Ravensbourne Water Works’ (which remain on the east side of the river, as a large Thames Water pumping station) and a mill. Until the beginning of the twentieth century, Brookmill Road was said to be lined with small cottages possibly dating to the eighteenth century. The surviving eighteen century houses on Tanners Hill might resemble what this row of cottages might have looked like. (They were demolished by London County Council and the water company just before the First World War and their residents rehoused in the row of Edwardian cottages, which remain extant on the west side of the road.)

The oldest surviving property from the pre-Victorian period, and which would have dominated the surrounding countryside, was ‘Stone House’, constructed 1771-73 by ‘Gibson the Younger’, a journalist and aspiring statesman. He had accumulated land for the purpose of building his property over the 1760s, with titles acquired for the ‘Halfpenny’s field’ and ‘Morrice’s Land’ during this time. The Stonehouse remains a curious construction, and in the Nineteenth Century was known as the ‘Comical House’. At a time when today’s Lewisham Way would have been bordered by clear land on either side all the way from New Cross to Lewisham, it would have appeared as a very distinctive landmark for carriages leaving London for Kent. Acquired into private ownership from the Borough Council in the early 1990s, it has been restored to its Georgian splendour with great care and is often accessible on ‘Open House’ weekends, or for occasional concerts and events.